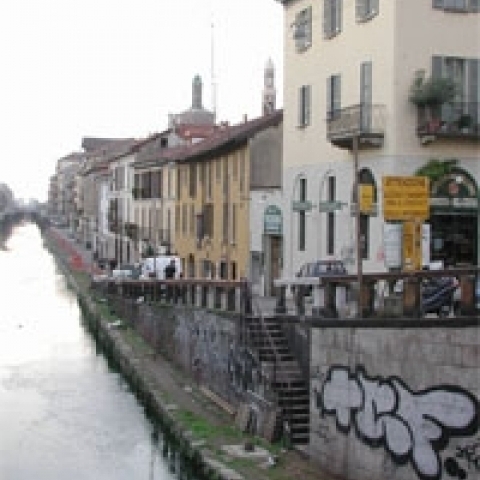 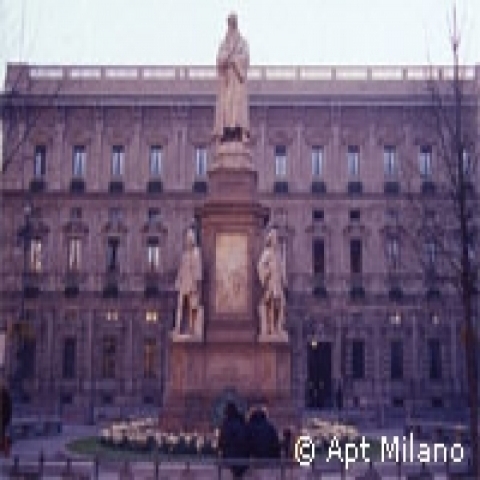 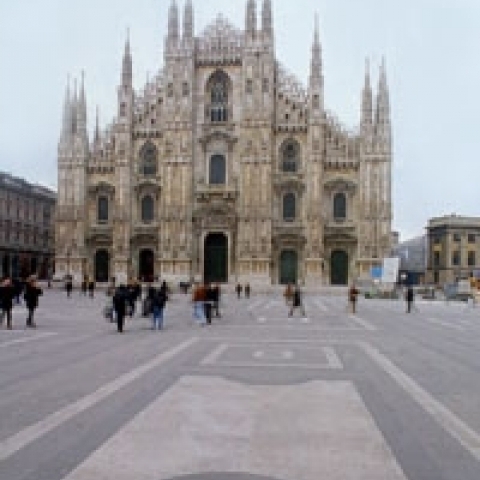 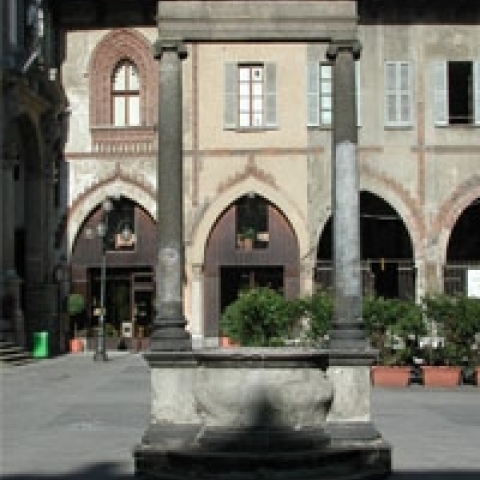 Milan was born as a Celtic settlement a couple of centuries before Christ.  Mediolanum meaning "the central place" was the Roman name for Milan.  By the fourth century AD, it was the capital of the Western half of the Roman Empire. It was here that the Emperor Constantine issued the Edict of Milan in 313 AD, which proclaimed Christianity as the state religion of the empire.

Early Christianity split into two significant strains, orthodoxy and Arianism, which stated that Christ was not of the same substance as God. This schism led to strife. Saint Ambrose was acclaimed bishop of Milan in 374 to combat the recently deceased Arian bishop of Milan. Saint Ambrose's most famous convert was Saint Augustine.  Ambrose, who later became a saint, left such an imprint on the city that the church in Milan was relatively independent from Rome until the 11th century. The rituals of the church is still somewhat unique, the Ambrosian rite, and true Milanese today are referred to as Ambrosiani.

the middle ages and the communes

Some time after the collapse of the Roman Empire, the name Mediolanum morphed into Mailand, meaning "the land of may". After the fall of the Roman Empire in the fifth century, and following the Goths, a barbaric Germanic tribe, the Lombards, invaded this region and much of the peninsula beginning in 568 AD. This fact endured centuries of chaos caused by additional waves of barbarian invasions. Feudalism took hold, as it did throughout much of Europe during the Dark Ages.

Milan formed one of Italy's first commune (or commonwealth) by 1024 under the leadership of the bishop Heribert. With the commune, he founded a parliament and a citizen's militia. The communal government along with the growth of manufacturing, banking and nearby agriculture led the city into a period of rapid growth, and subsequent strife with the neighborhood city-states. Milan's great rivals during this time were Pavia, Como, Bergamo, Lodi and Brescia. By the 12th century, Milan and much of the Lombardy region was prospering at rate unseen since the highlight of Roman times, and much ahead of the rest of Europe. Milan subjugated the surrounding area and cities of Como, Pavia and Lodi. In response to a request from Lodi, the Holy Roman Emperor, Frederick I Barbarossa, came to Italy in 1154 and eventually sacked Milan in 1158. Afterwards, the Milanese did not behave according to Barbarossa's wishes and he returned, laid siege and eventually devastated Milan. Instead of being an example to the other independent-minded city-states, this instead spurned the creation of Lombard League that consisted of all of nearby cities (except for Pavia which despised Milan too much to participate). When Barbarossa returned to Italy a third time, this united Lombard League defeated him. During his fifth trip while preparing to lay siege to Milan in 1176, he was crushed at Legnano outside of Milan. This unity did not last long, and the city-states resumed to their desired occasional warfare amongst themselves after the Treaty of Constance was signed with the Emperor in 1183, which kept him out of their business.

By 1300 the Holy Roman Emperor and the Holy See turned their attention away from Italy. The emperors worried about German affairs while the popes spent the time trying to spread its influence over the rest of Europe, and met considerable resistance from the French, who moved the papacy to France during this time. This lack of interference lasted in northern and central Italy until nearly 1500. The Black Death of 1347-48 killed about a third of the population of Italy. This put a temporary halt to the 400 years of continued prosperity and growth.

From the mid-13th century, the city was governed by a succession of important families: the Torrianis, the Viscontis and the Sforzas. Under the latter dynasties, Milan enjoyed considerable wealth and power. Under the leadership of Gian Galeazzo Visconti, Milan conquered much of northern Italy before he died of the plague in 1402. He began the Duomo in 1386 and founded the Certosa in nearby Pavia in 1396. There was a brief attempt at democracy with the Ambrosian Republic which lasted only from 1447 to 1450, which ended when Francesco Sforza was peacefully invited to become the Duke of Milan. He successfully ruled until 1466, improving the water transport and agriculture, and remained at peace through an alliance with the Medici who ruled the great power of Florence.

Francesco Sforza was succeeded by his second son following the assignation of his eldest son. Lodovico Il Moro, who was possibly Milan's most cultured leader, whose reign included patronage of Leonardo Da Vinci, was responsible for one of Italy's greatest political mistakes. After his quarrel with the government of Naples, he invited Charles VIII of France to march through his territory and the rest of the Italy to claim the Kingdom of Naples. After not being stopped by a league of several Italian states at the Battle of Fornovo in 1494, the French had shown that the rich Italian cities and states were vulnerable in their disunity, and worthy of domination and exploitation. This marked the beginning of the end of Milanese and Italian independence. Milan and "Il Moro" were captured by the French in 1500. After defeating the French at Pavia in 1527, by roughly 1530 almost all of Italy had been subjugated by the Habsburg ruler Charles V, who was both the Holy Roman emperor and king of Spain. Milan was ruled by then ruled by a Spanish viceroy that continued its domination by foreign powers that lasted until 1860.

Charles Borromeo was the Archbishop of Milan in the mid-16th century who zealously and effectively carried out the reforms of the Council of Trent that he helped instigate. These changes aimed to reform the Church and combat the Protestant Reformation that was raging throughout much of Europe. He cleaned out corrupt clergy and successfully reestablished the orthodoxy of the Roman Catholic Church in most of the region. He helped to develop a greater sense of regional pride with the promotion of the memory of Milan's patron Saint Ambrose. He relocated to Milan after the death of his uncle, the Medici Pope Pius IV, became the first archbishop and he served the city for 80 years. But, his conservatism did not play well to free-thinking Milanese, and he survived an assignation attempt in Milan's Duomo. His nephew and successor, Federico Borromeo furthered his work and also helped charitable and cultural institutions.

the austrian and the napoleonic domination

Though the Spanish rdomination brought peace and stability, at least during the first part of it, this was a period characterized by general cultural and economic stagnation, both in Milan and most of Italy. Spain remained the dominant power in Italy until Austria replaced it after the War of the Spanish Succession that ended in 1714.

Under the enlightened rule of Austria's Maria Theresa and her son, Joseph II, from 1740 to 1792, Milan and the entire Lombardy region experience intelligent economic reforms that helped to give this area an edge during the upcoming industrial revolution.  And, the facades of La Scala theatre and the Palazzo Reale, built during this time were painted in Maria Theresa's favorite shade of yellow.

Napoleon arrived in 1796 and set up the Cisalpine Republic in Lombardy. Italian patriots eagerly joined the French cause at first. After the famous victory at Marengo in nearby Piedmont in 1800, Napoleon was eventually crowned the King of Italy in Milan in 1805. Education and laws were reformed on the French model.  But, by the time the Austrians chased out the French, most Italians had grown weary of the high taxes, oppression of the French and the ambitious, war-mongering Napoleon who looted much of Italy's treasures that currently provide the highlights of the Louvre.

during the unification of italy

In the 1840s Milanese Alessandro Manzoni published I Promessi Sposi (the Betrothed), a novel that presented Italian history through the eyes of ordinary Italians. It was significant because it was written in a new Italian language that could be understood by the speakers of the hundred or so dialects that existed on the peninsula. Formal Italian had remained unchanged since Dante's publications five hundred years earlier. Manzoni's novel was also important because it popularized the cause of Italian unity and independence. Though the popularity of the novel never really left Italian soil, it remains very popular and still studied at school.

Austria regained control of the city after the Treaty of Vienna. They remained in control until 1859, excepting a brief interlude in 1848 when an uprising chased the Austrians from the city. The city had long been a hotbed of Italian nationalism. In 1860 Victor Emmanuel II of Piedmont and Napoleon III of France defeated the Austrian forces at the Battle of Magenta. Milan was incorporated into the Kingdom of Italy in 1860. After unification the city of Milan grew and prospered. The ornate Galleria Vittorio Emmanuale II was built during this time as a gift from the grateful Milanese to the first king of Italy. Though affected by serious labor strife in the 1890s and 1900s, it recovered each time and remained a beacon of modern Italy until the First World War.

Heavily bombed in WWII, the city was subsequently rebuilt and quickly grew to its modern commercial prominence. Over a quarter million Italians from the South and Sicily have immigrated to Milan since the Second World War. An important part of current Milan's image, in addition to a key part of its economy, the fashion industry began moving from Florence to Milan in the late 1960s because of the lack of a nearby airport in Florence.

The large Duomo, its piazza and the Galleria remain to this day the center of a sprawling metropolis. The Navgli neighborhood is named for the navigable canals that were once an important part of landlocked Milan. These have been neglected with the increase in truck and airport transport. Until the 1950s, the ports in Milan handled more tonnage than the seaport of Brindisi. Numerous buildings were built during the first half of the 20th century that provide much of the cityscape today including the imposing central train station, which is the largest in Italy. Very close to that is the thin, graceful Pirelli Building, one of the first significant examples of modern architecture in postwar Italy that was completed in 1959. Milan might be the most attractive city, nor most attractive to tourists, but it remains the most vibrant, and the engine of modern Italy.