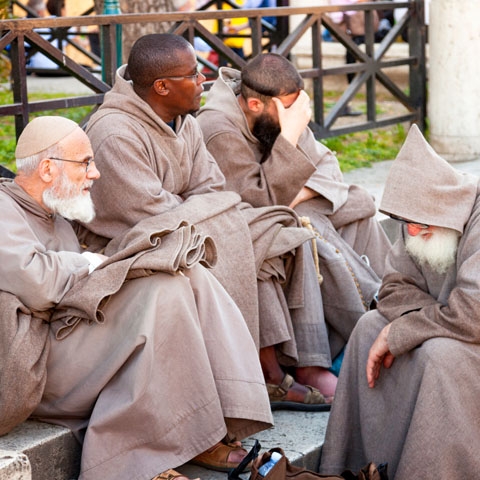 Italy is one of the most significant travel destinations in the world for spiritual travelers. With its 2,000 years of history with Christianity, the world’s largest religion, it has long since been a destination of pilgrimage for many who live in faith. Custom religious and spiritual vacation packages from Trips 2 Italy help those seeking meaningful and memorable spiritual journeys by leading them to the best destinations to learn history, gaze upon religious monuments, and view ancient artifacts of Christianity.

Whether traveling alone, with family, or as part of a larger religious organization or church group, we can help to customize an itinerary filled with touchstone destinations and spiritual activities that will awaken your spirit and speak to your soul. Trips 2 Italy understands that like every spiritual journey, every vacation is different. That is why we work directly with our guests to customize a one-of-a-kind itinerary that captures the religious and spiritual meaning they desire.

Help Me Plan My Religous Trip to Italy

By far the most popular destination for spiritual pilgrimage throughout Italy is Rome, home to countless significant religious locales as well as the Vatican itself. Along with the city’s other intriguing and awe-inspiring attractions, a visit to Rome will help magnify any Christian’s faith.

As the home of the Roman Catholic Church and the Pope, Vatican City is the premiere destination for Christians and Catholics. Though it is the world’s smallest state, it arguably has had the biggest impact of any state due to the Christian religion’s effect on believers across the globe. When visiting the Vatican, travelers are a part of the heart of Christianity.

Visit the Vatican Museums, home to nearly 70,000 artistic works of art curated by the Popes of the past and present, including the famed ceiling of the Sistine Chapel, painted by Michelangelo in the 1400’s. Or take a guided tour of St. Peter’s Basilica, one of the largest churches on Earth and one of Christianity’s most holy sites. For a truly moving and once in a lifetime spiritual activity, enjoy a papal audience at St. Peter’s Square. This soulful experience typically includes a holy speech by the Pope himself as well as prayer, singing, and blessings.

Another spiritual tour to take in Rome is one of the Christian Catacombs. This journey will take you beneath Rome, where you will explore the subterranean tunnels that served as the burial locations for early Christians. These fascinating tombs offer perspective on ancient roman practices and serve as a reminder of the birth of the Christian religion.

At Trips 2 Italy, we can customize your stay in Rome to include all of the essential spiritual tours and sightseeing that you wish. We even offer “skip the line” tickets, getting you and your group front of the line entry to these highly sought-after locations.

Help Me Plan My Spiritual Trip to Italy

As one of the most significant religious destinations in the Christian religion, Italy is home to a countless number of holy cathedrals, churches, and basilicas. Each has their own rich history, stunning architecture, and priceless art to take in, making them ideal locations for spiritual travelers to enjoy.

In the Umbria region of Italy, visit the Basilica of Saint Francis of Assisi. The town of Assisi is where St. Francis was born and where he passed away. The Basilica, which is divided into an upper and lower level due to the hill it was constructed on, is a place of intense worship and an honor to one of the world’s most well-known Saints.

In the sacred town of Loreto, visit the Basilica de la Santa Casa, more commonly known as the “Holy House.” Dubbed by Pope John Paul II as “the true Marian heart of Christianity,” Santa Casa is the house from Nazareth where the Virgin Mary was born and educated. Legend has it that the three stone walls that comprised the small room were brought to Santa Casa by crusaders in 1291. Today it is one of the most highly regarded religious locations in the world.

Among the most popular basilicas in Italy are the Basilica di Santa Maria del Fiore (Florence Cathedral) in Florence, featuring the magnificent Brunelleschi's dome, and the Basilica di San Marco (St. Mark’s Basilica) in Venice, the city’s most recognizable and most celebrated church. Of course, there are countless more holy churches, cathedrals, and basilicas throughout the country. At nearly every turn there is a spiritual site to admire, making Italy the ideal destination for a religious pilgrimage.

While it would be impossible to experience every holy location throughout Italy in a single trip, there are a few key places worth considering when planning your custom religious and spiritual tours.

Located in Southern Italy in San Giovanni Rotondo is the shrine of Padre Pio, a highly regarded Italian Saint who died in the 1960’s. His body was exhumed from his crypt in 2008 and placed on display at the Santa Maria delle Grazie sanctuary. A popular pilgrimage site for the Catholic religion, the shrine of Padre Pio is a moving experience.

In Turin is the Duomo di Torino, a destination to which many religious believers flock to see the Capella della Sacra Sindone (Chapel of the Holy Shroud). On display there is the Shroud of Turin, a religious relic that bears the image of a man that is believed to be Jesus of Nazareth. The cloth is believed by some to be the burial shroud of Jesus himself. The Chapel of the Shroud is one of the world’s most sacred destinations.

In Rome is the Mamertine Prison, which is believed to be where St. Peter and St. Paul were imprisoned in ancient Rome for their Christian beliefs. Christians have been pilgrimaging to this site since the sixth century to honor the plight of early believers.


An absolute treasure trove of spiritual locales, Italy is the perfect place in which to follow the paths of Patron Saints and gain a deeper appreciation and understanding of one’s faith. Trips 2 Italy will create the perfect, custom religious or spiritual retreat that will lead you, your family, or your religious organization on the journey of a lifetime.

Help Me Plan My Trip to Italy

Plan My Trip To Italy
“Dear Tommaso, Thank you for planning our recent trip to Italy. It was an incredible experience and created many memories which our family will cherish for years. Everything was well organized and accommodations were perfect. We especially enjoyed our driver, Tomas, in Sienna, as well as our guide, Francesca, at the Colosseum and Forum. While all of our guides and drivers were very professional and knowledgeable, these two shined a little brighter.I would highly recommend your company to others in the future and thank you again for making our vacation memorable!Sincerely”
Marcy G. and Family
Marietta, GA