One of the most coveted vacation destinations in Italy is the Italian Riviera.  Situated on the coastline of northwestern Italy, the Italian Riviera is known for its picturesque scenery of colorful little villages perched on cliffs that face the deep blue waters of the Ligurian Sea. This vacation package includes an eight day trip through iconic coastal cities such as Genoa, the villages of the Cinque Terre, Portofino, San Fruttuoso, and more. As the days unfold, travelers will visit sights such as the Cinque Terre National Park, the San Fruttuoso Abbey, the Cathedral of San Lorenzo in Genoa, and the Tigullio Gulf. Spend your days admiring the beautiful coastal scenery of the Italian Riviera during this independent travel package.

HIGHLIGHTS:
2 nights stay in Genoa, birthplace of Christopher Columbus and hometown of the famous Aquarium;
2 nights stay in the charming seaside resort of Santa Margherita Ligure, on the Tigullio Gulf minutes away from Portofino’s “scene”;
3 nights stay in one of the five villages of the Cinque Terre, a UNESCO World Heritage Site;
1 half day and 3 full days of private guided excursions to Genoa, Portofino, the San Fruttuoso Abbey, the Cinque Terre National Park and Portovenere;

DAY 1: GENOA
Arrival on your own in the colorful and lively sea port city of Genoa. Famous for being the birthplace of Christopher Columbus, Genoa has always been one of the most powerful sea ports in Italy and the entire Mediterranean. For centuries Genoa dominated the seas and you can witness its rich and dense past in the many architectural and cultural treasures of the historical center. Recently with its selection as the European City of Culture for 2004, and other events like the celebration of Christopher Columbus's discovery of America, the G8 Summit, and the renovation of the Porto Antico (old harbor), the city has once more enhanced its cultural and artistic role in the Italian and international panorama. Check in at your hotel and enjoy the rest of the day at your leisure. Perhaps you may wish to visit the Aquarium of Genoa, one of the largest in Europe. 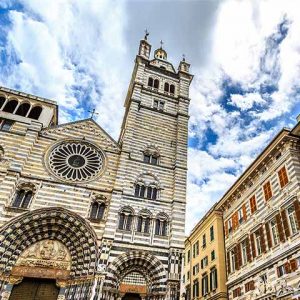 DAY 3: SANTA MARIA LIGURE, TIGULLIO GULF
After breakfast, you will check out from your hotel in Genoa and you transfer by private car to your next destination: Santa Margherita Ligure, an elegant town on the Tigullio Gulf. Thanks to its beautiful position on the Gulf, the mild winter climate, and its rocky and sand beaches, Santa Margherita Ligure is a very famous sea resort on the Italian Riviera along with nearby Rapallo and upscale Portofino. Check in at your hotel and enjoy the rest of the day at your leisure. 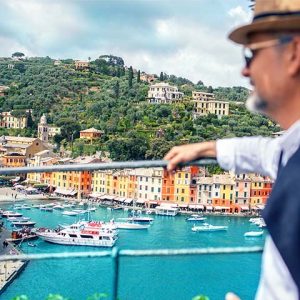 After a good Italian breakfast, your full day starts in the hotel lobby, where you’ll meet your tour guide and begin your sightseeing tour of the picturesque Tigullio area. We’ll take a boat trip to Portofino, a luxury resort town of the rich and famous, known for its sunny charms. The tour will then visit the Benedictine Abbey in San Fruttuoso, a Gothic styled complex perched on the coastline. Camogli, a quaint fishing town, is last on the agenda, before taking the train back to Santa Margherita Ligure for the night.

DAY 5: MONTEROSSO AL MARE, CINQUE TERRE
You’ll enjoy a free morning, before meeting up with your driver to transfer to the hotel in Monterosso al Mare, one of the five villages of the Cinque Terre National Park, a UNESCO World Heritage Site. Check in at your hotel and enjoy the rest of the day at your leisure.

DAY 6: CINQUE TERRE NATIONAL PARK
After meeting your tour guide in the hotel lobby, you’ll depart for a full day guided sightseeing tour of the Cinque Terre. We’ll take the train to Vernazza, 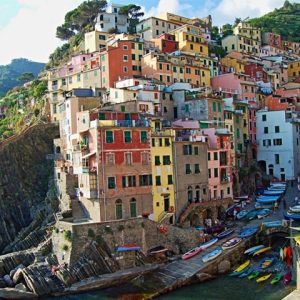 a pedestrian only fishing village, and then on to Manarola, considered to be the oldest of the Cinque Terre towns. We’ll walk along local trails taking in amazing panoramas before reaching Riomaggiore, another picturesque village where we will enjoy a local wine tasting. Later we will reach our next destination by boat: Portovenere. With its many churches, including the Church of San Lorenzo, built on top of the remains of a temple dedicated to Jupiter, the picturesque harbor and the rocky fortress, the lovely town of Portovenere has been a favorite of the Romantic poets Byron and Shelley. At the end of this unforgettable day, we’ll take the boat back to Monterosso.

DAY 7: MONTEROSSO AL MARE, CINQUE TERRE
In the morning, you’ll meet your tour guide at the train station, and depart for a sightseeing tour of Corniglia, the only town of the Cinque Terre not directly connected to the sea. You’ll enjoy the view from the promontory, and walk the winding streets. In the afternoon return to Monterosso and enjoy the rest of the day at your leisure.

Sorry for the delay in replying. We have been busy getting settled back into our trip. Congrats and I hope you had a good Honeymoo

WHAT IS NOT INCLUDED:
- All Land & Air prices: Additional U.S. & Foreign Departure Taxes and Surcharges Fee(s) assessed by the Airlines.
- Hospitality city tax which varies by city and hotel category. If applicable it has to be paid locally to the hotel.
- Meals and beverages.
- Entrance Fees to Monuments or Museums, Tips, Extras.
- All what is not mentioned in “PACKAGE INCLUDES”.

(*) Rate based on two adult persons sharing a double or twin bedded room with private bathroom. Single rooms are available at an additional supplement. Children’s, triple room rates and alternative accommodation arrangements are available upon request. (Additional and different charges may apply).

Help Me Plan My Trip to Italy