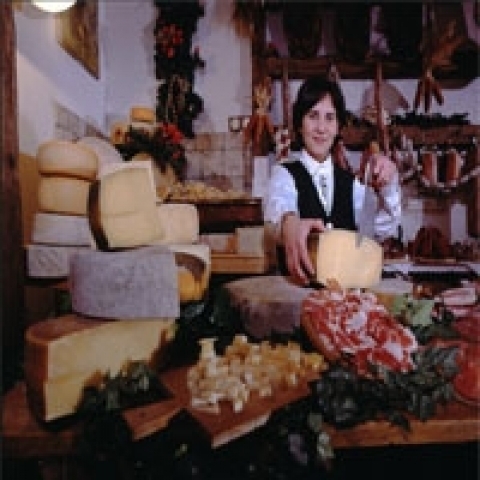 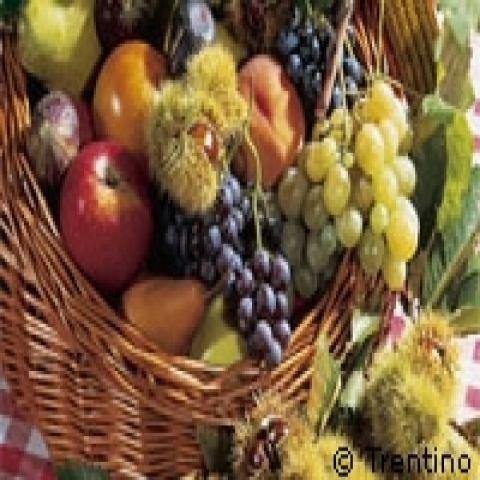 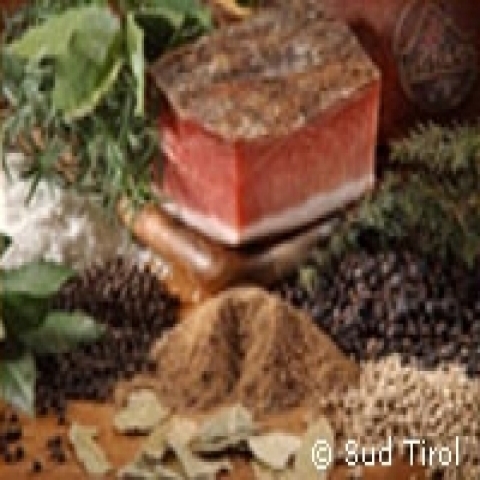 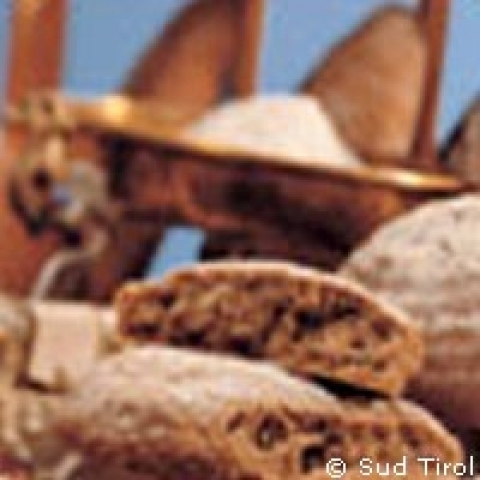 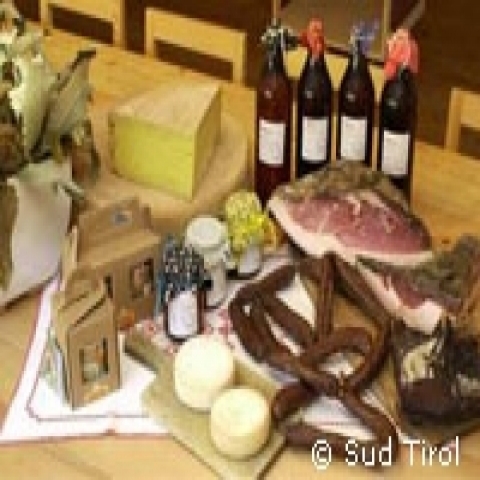 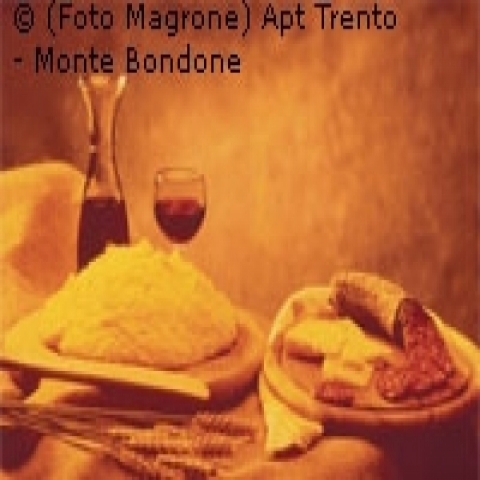 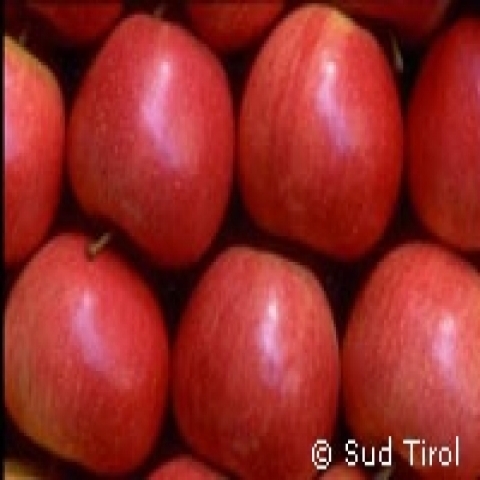 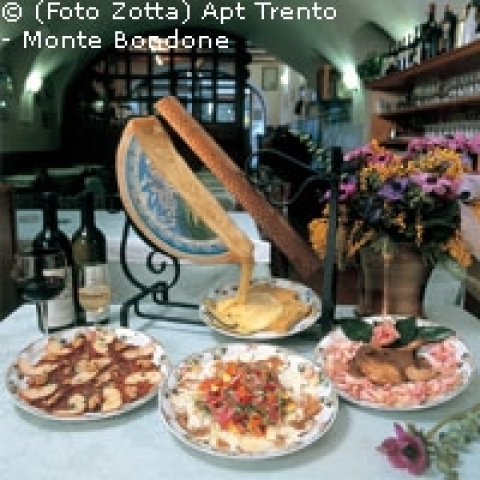 Trentino thrives on polenta, usually made from corn but also from potatoes or buckwheat, which is used in a sort of cake called smacafam, baked with sausage, salt pork, and sometimes cheese. Preparation and different ingredients are dependent upon the area. Some valleys use corn meal mixed with flour Saracen wheat, resulting in a strongly-flavored polenta, darker in color. Polenta is prepared with potatoes and local cheese served with cucumbers, pickles, or bean salad in other areas.

Beyond conventional ravioli and tagliatelle, first courses include bigoi and strangolapreti (literally "priest strangler") which is gnocchi of spinach, flour, eggs, and cheese.

More than 250 varieties of mushrooms are sold and are used to make scrumptious sauces served with polenta and pasta, or used as the base for certain meat dishes. Trentino's prominent cheese is Grana Trentino. Every Alpine village makes its own version called nostrano (ours). Alto Adige's many local cheeses include the grainy, sharp Graukaese, soft, mild Pusteria and Pustertaler, and goats's milk Ziegenkaese.

In Alto Adige the cuisine has a German influence and lacks the typical Italian flavors. They use spices and other ingredients unknown to other regions. Canederli is a popular dish here. It is served as a soup and served with goulash.

Alto Adige's gastronomic pride is speck, a boneless part of meat cut in small square pieces and placed in saltpeter with garlic, laurel, juniper, pepper and other herbs. Made mainly in the Venosta valley, the speck is then hung in an aerated smokehouse. At a low temperature, the smoke grazes the meat for a few hours a day.

Desserts consist of soft and frothy whipped cream on top of fragrant hot chocolate. One can't resist a strudel or a slice of zelten, a kind of pizza dough with dried fruit that is conserved for the entire winter. Sweets in this cold climate are served for more than just a tradition, as sugar, whipped cream, chocolate and dried fruit fight the cold better than a wool sweater. Other sweet treats include Soffiato alla Trentina, a meringue, and Zelten Trentino, a rich fruitcake flavored with grappa a usual eaten around Christmas.

The region is Italy's leading producer of apples, which appear in strudel and the fritters called Apfelkuechel. Krapfen are baked or fried pastries with jam. Zelten is a rye flour Christmas cake with candied fruit, nuts, honey, cinnamon, and liqueur, though recipes vary between provinces. Trento's sweet version of buckwheat smacafam contains raisins, nuts, and aniseed.

Just as the natives of Alto Adige and Trentino have two distinct cultures, they also have two distinct wine zones. Alto Adige is quite mountainous; many of the grapevines grow on south or east-facing slopes on the western hillsides. Only 15 percent of the land is cultivable. The most popular grape variety is a red one, Schiava, more commonly known in the South Tyrol by its German name, Vernatsch. This variety accounts for over 60 percent of Alto Adige's wines and is the basis of locally popular, light-bodied red wines. The most highly regarded of these is St Magdalener or Santa Maddalena, grown on the picturesque slopes overlooking Bolzano. The best known wine is Caldaro or Kalterersee, produced from vines around the pretty lake of that name at the rate of nearly 15 million bottles a year.

Trentino, which boasts Italy's largest production of Chardonnay, is a leader with sparkling wines by the classical method, many of which qualify under the prestigious Trento DOC. Trentino also boasts one of Italy's best sparking wine houses, "Ferrari". Trentino is also known for some fine red wines from from its local variety, Teroldego, and from Sauvignon and Merlot, as well as some good quality white wines.

Despite the traditional flow north to German-speaking countries, the wines of Trentino-Alto Adige, whites in particular, have been making steady progress in Italy and, recently, on distant markets, such as the United States and United Kingdom.

In both provinces, increasing space has been devoted to Cabernet Sauvignon and Merlot, which can reach impressive heights whether alone or in blends. The region also produces some of It's finest roses, the most impressive being Lagrein Kretzer. The sweet Moscato Rosa, with its gracefully flowery aroma, is a rare and prized dessert wine.

One of the best times to visit Trentino Alto Adige is in December when beautiful Christmas markets abound.
Tommaso's Trentino...