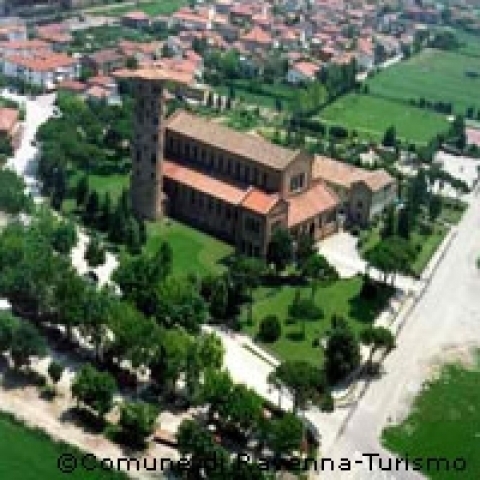 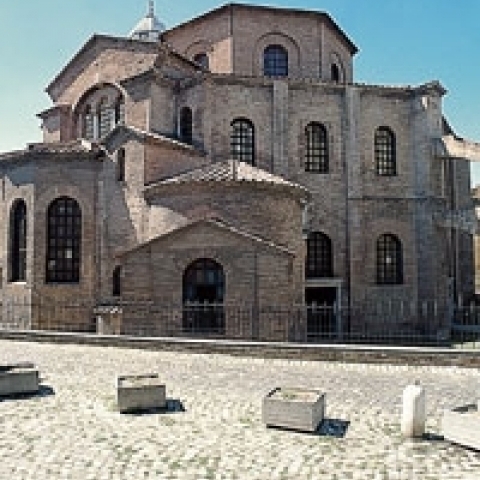 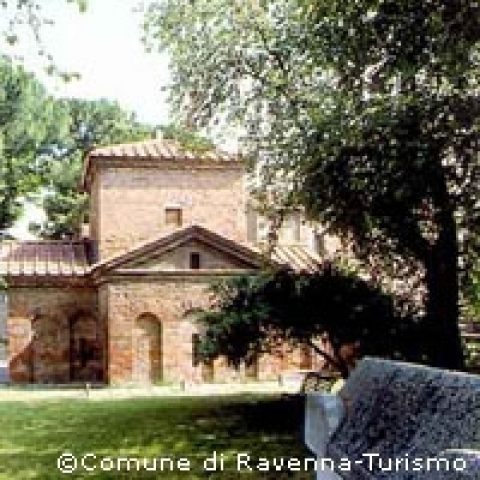 Ravenna which dates from 2 BC was built on a series of islands in a lagoon. Occupied by both the Etruscans and the Gauls, Ravenna was originally a remote village founded among the marshes and lagoons of the Adriatic coast, its houses resting on wooden piles driven into the shifting mud, as those of Venice were to be centuries later. Here generations of fishermen and peasants lived in precarious safety, protected by the marshlands surrounding them.

The strategically-minded Romans, realizing the location's potential, incorporated it into the Empire in 89 B.C. Forty years later, Caesar gathered his armies here before crossing the nearby Rubicon to defeat Pompey.

Around the time of the birth of Christ, the Roman emperor Octavius Augustus Caesar, seeing its strategic advantages, chose it as the naval base for his eastern Mediterranean fleet. The marshes were drained and shipping canals were dug westward and northward, effectively assuring that Ravenna would retain her strategic importance for centuries to come. The port was named Classis, and it became Rome's biggest naval base in the Adriatic. Installations had to be built for 250 ships; it was the strongest fleet in the empire. Ravenna became a "boom town".

In 402, with Rome declining and the barbarians at the gates, Emperor Honorius moved his court from Milan to Ravenna, which became the capital of the Western Roman Empire and one of the great cities of Europe. He did this partly to be in closer proximity to his father, Theodosius II, ruler of the Eastern Roman Empire, who could come to his aid. In 409, the Goths swept down the peninsula, invading and completely overwhelming Rome. Honorious's half-sister, Galla Placidia, was kidnapped and held in captivity for nine years.

It is said that she became an early example of what we now call the "Stockholm" syndrome, falling in love with one of her barbarian kidnappers and going into battle by his side. Eventually Honorius ransomed her and sent her to Theodosius along with her barbarian captor, Theodoric. When Honorius died, Galla was sent to act as regent in Ravenna and Theodoric was officially adopted by Theodosius. Galla ruled for 25 years and left several impressive monuments as a legacy, including her Mausoleum.

Rome fell, but Ravenna flourished, first under the Visigoths, and then under the Byzantines. Great churches were built with beautiful mosaics to decorate them. But the Byzantine dream of reuniting East and West into a single empire was destined to fail, and Ravenna fell slowly into decline.

In the 5th and 6th centuries Roman and Byzantine cultures converged in Ravenna and transformed it into a Western Byzantium with superb mosaics.

In 741, Ravenna was captured by the Lombards, who were in turn defeated by Pipin the Great. In gratitude, the Pope authorized Pipin and his son Charlemagne to take anything they wished from the city, and their armies obliged. Ravenna never forgave Rome for this. Withdrawing into her swamps, she cut herself off so effectively that it was the only place Dante Alighieri, the great 14th century poet, could find sanctuary after being exiled from Florence.

The Da Polenta family were lords in Ravenna from the 13th to the 15th century. After a period of Venetian domination, the city returned to papal control in 1509. During the Italian Wars, the French defeated Spanish and papal forces at Ravenna in 1512 and the French commander, Gaston de Foix, died in the battle.

The port of Classis gradually silted up and was abandoned. The city was fought over and occupied by various powers, then slowly reduced to the rank of provincial town, isolated and economically depressed.

In 1952, after a thousand years of stagnation, extensive deposits of methane were discovered and new port facilities and industrial complexes sprang up.