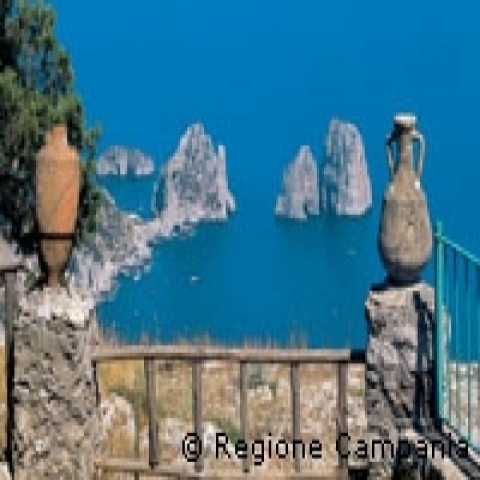 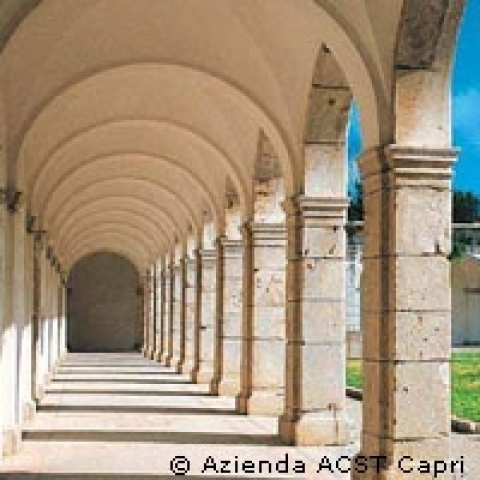 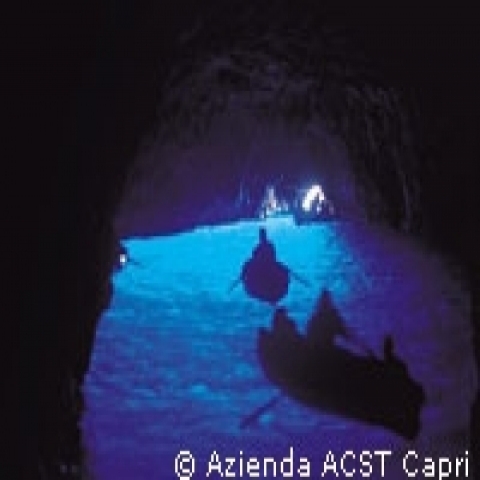 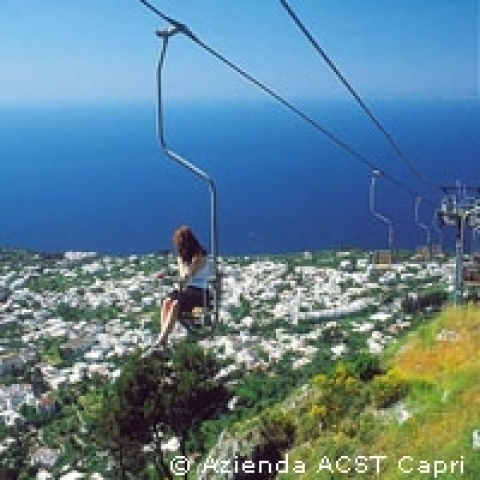 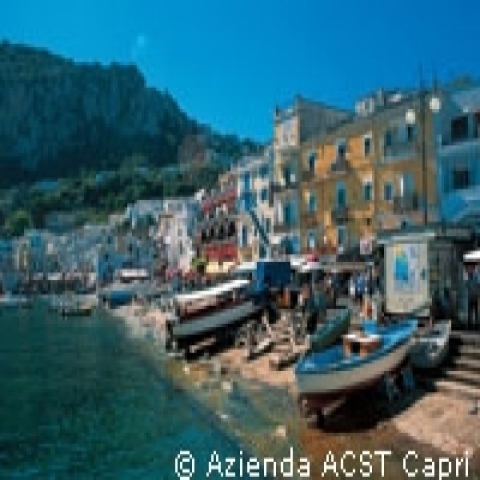 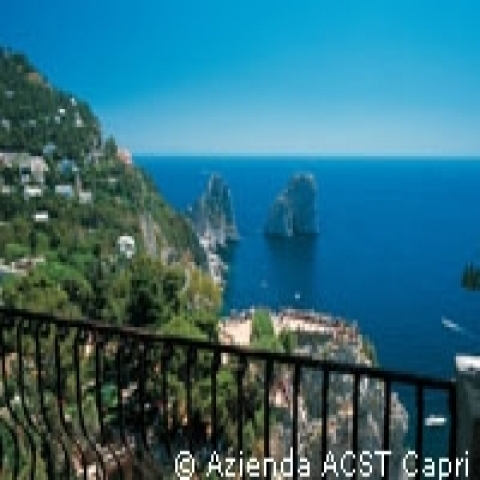 Capri Things to Do

The Piazza Umberto I (commonly called Piazzetta Square) is Capri's main square and the island's heart and main center of action. Here you may sit on a park bench and people-watch, mingle with the local residents, or have a meal or drink at one of the many charming restaurants or cafes. The square offers spectacular views of the island's cliffs and the bright blue water of the Gulf of Naples (Napoli). A number of narrow and winding alleys branch out from a central square allowing you to explore more of this very picturesque town by foot.

The magical Grotta Azzurra is an ocean cave located on the northwest side of the island. Light mysteriously enters the cave from below and illuminates the water contained therein. Visitors are amazed at the unique refraction of light that causes the water in the grotto to glow a brilliant deep, bright blue-the whole cave is illuminated in an ethereal blue neon light.

To reach the cave you may purchase a ticket at Marina Grande for a 90-minute boat ride around Capri to the grotto. Upon arrival you will be transferred to a smaller boat and rowed by a guide through the cave.

Just above the Grotta Azzurra, you'll see the ruins of Villa Damecuta, one of the 12 residences of Tiberius.

The ruins of  Capri's largest and most luxurious imperial Roman villa, Villa Jovis (Jupiter's Villa) is the largest and best preserved of the Roman villas on the island. In its heyday, the villa was a vast complex, including imperial quarters, grand halls, baths, and gardens.

Located on a beautiful cliff on top of Mount Tiberio, about 1,200 feet above sea level, the villa was built for the Roman Emperor Tiberius at the beginning of the 1st century AD, and you may view the well-preserved remains of this enormous structure. The cliff on which this villa is perched is reputed to be the place where the Emperor Tiberious would throw off his displeasing subjects to their deaths.

The view from the Cappella di Santa Maria del Soccorso, built onto the villa, is unrivaled.

The Gardens of Augustus, built on the ruins of ancient Roman structures, originally belonged to Friederich Alfred Krupp, a wealthy German industrialist who resided in Capri during the 19th century. He later donated the Gardens to the Town of Capri, and the town renamed the Gardens in honor of the Roman Emperor Augustus. The Gardens overlook the sea and the steepest face of Mount Solaro, with scenic terraces offering panoramic and spectacular views of the Capri coastline and its jagged cliffs.

Built beginning in 1896 by Swedish author-physician Axel Munthe, this magnificent building in Anacapri displays 17th century furniture and Roman sculpture on the site of a former Tiberian villa. When the excavations for San Michele were begun, remains of a Roman villa were unearthed and can still be seen. Many of the classical sculptures in the villa were retrieved from Capri's sea bottom, where they were hurled (perhaps in celebration) after Tiberious' death.

Next to the ruins of an old Roman Palace, he built Villa St. Michele, a museum that contains his collections.

Starting from the Piazza Umberto I (Piazzetta Square), you can take short trips by bicycle, moped, car, or on foot, although the latter solution can be very tiring in certain cases.

To visit Villa Jovis, the splendid residence of the Emperor Tiberius, start from Piazzetta Umberto I and turn into Via delle Botteghe, continuing straight on through Via Fuorlovado, Via Croce, and, finally, Via Tiberio. Other attractions in the vicinity are the Church of Santa Maria del Soccorso, the Cave of Tiberius, and the Lighthouse Tower.

The walk that leads towards Marina Piccola from the Piazzetta is extremely beautiful. You can get to the beach by following Via Vittorio Emanuele until coming to Via Matteotti, which joins up with the famous Via Krupp, where you can enjoy some splendid views. By following Via Matteotti, you will have the chance to stop off at the wonderful monastery, the Charterhouse of San Giacomo.

The Belvedere Tragara is another spot that is well worth a visit. Take Via Vittorio Emanuele from the Piazzetta until coming to Via Camerelle. Continue straight until you reach the Evangelical Church and then take Via Tragara to the end at the Belvedere. After admiring the wonderful view of the Faraglioni islands, visit some of the beautiful caves located in the vicinity: the Grotta di Forca and the Grotta di Porto Tragara.

Every year from December to January, Capri, will be paparazzi paradise. Films, actors, and directors converge from Hollywood and the entire world.