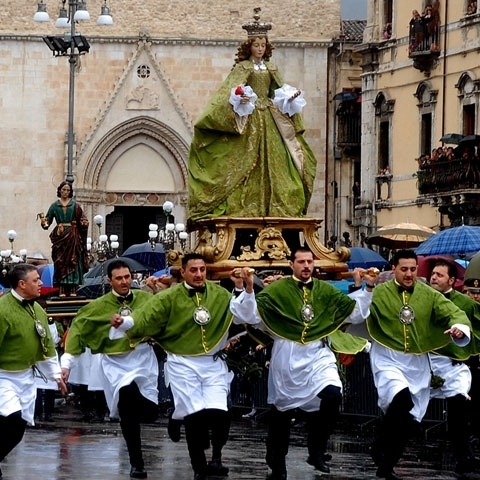 If you are looking to explore some of the less traditional sights and towns in Italy, you might want to travel to the middle of the “boot” in the province of L’Aquila on a plateau (350 miles high), which is in the Abruzzo region.  There, surrounded by imposing mountains, you will find the secluded and small city of Sulmona, It is one of the oldest towns in Abruzzo, whose origins date back to the destruction of the great city of Troy. Its name derives from “Solimo”, one of the Aeneas’s travel companions name.

Sulmona has several squares, churches and palaces of historical significance. One of the highlights of the town is the 14th Century Palazzo Annunziata, with its decorative façade. It is considered one the most rare examples of late medieval/early Renaissance architecture and nowadays it houses the Civic Museum with various exhibits of local interest. Only few steps away is the Church of Saint Annunziata. In classic baroque style, it houses a beautiful interior and bell tower. Next to it there are the remains of a Roman Villa, dating back 2000 years, displaying some very impressive mosaics and decorative paintings. The impressive City's Cathedral, consecrated to San Panfilo, is built on the location of an Ancient Roman Temple dedicated to Apollo and Vesta. It contains a crypt, which retains its Romanesque appearance despite the 18th century renovation and the severe earthquake of 1706. Piazza XX Settembre is one of the main squares of the city. In it center it display a bronze statue of the Roman poet Ovid, to whom the main shopping street is named, Corso Ovidio. This large street is lined by elegant covered arcades, shops, palaces and churches and represents the perfect place to stroll around and have a coffee in the many elegant Cafés. The other main square is Piazza Garibaldi, a large open square with a baroque fountain called "Fontanone" The south side of the square is bordered by the imposing Medieval Aqueduct built in 1256, 100 meters long and supported by 21 pointed arches. Noteworthy are also the four “Porte” (gates - Porta Roman, Porta Filiamabili, Porta Japasseri and Porta  Bonomini) which were in ancient times the only entrance to the fortified city. While only remains are left standing, it is a testament to the fact that Sulmona, in Medieval times, was a flourishing and powerful center, encircled by defensive walls.

At the end of Corso Ovidio there is another gate dating back to the 13th century.  Formerly known as the 'Nova', it was changed to Porta Napoli, as it looks towards Naples. Its structure dates back to 1338 and up to the last century, it was used for the control of imports and exports, as well as for the collection of taxes.

Despite its remote location, visitors can get to Sulmona easily from Rome via train, bus and by car. There are local buses and taxis that will take visitors around town as well as private car services. And it is always a delightful town to explore on foot.

However visitors arrive, and regardless of how long they stay, the accommodations, cafes, historical sights, markets and shops will leave you feeling like you have stepped back in time.

Special Thanks for the photos go to Servizi Turistici Sulmona - Soc. Coop. and the photographers from Hobby Foto Sulmona e Massimiliano Verrocchi.

Confetti, almond and sugar treats that are never missing at any Italian celebration, originated in Sulmona.
Tommaso's Sulmona Travel...